I will show you how to create an installation ISO file for all versions of macOS (OS X) after 10.7 Lion.

Here, I will explain in detail the procedure using the “Terminal” of the  Mac genuine application using illustrations.

I think that the ISO file for macOS installation is often used with virtual environment software such as VMware and VirtualBox.

Also, I actually checked the operation of the created all ISO files with VMware and VirtualBox.

By the way, what the “shell script” does is roughly as follows.

The spelling of the command changes depending on the OS version, making it difficult to understand, but what you are doing is simple.

However, since the folder structure from OS X 10.7 Lion to OS X 10.12 Sierra is different from 10.13 High Sierra or later, the commands are slightly different, but if you use the script on this page, that will also be supported. I don’t think I have any particular problems.

On Mac, you can install VMware and VirtualBox from almost any version of the created ISO file.

However, be careful when installing 10.12 Sierra and 10.11 El Capitan as shown in the table below.

The Mac version of VMware Fusion Player 12 can be installed from the OS installer without using any ISO files.

After opening “Settings”-“Compatibility” of the virtual machine and changing “Hardware version” to 17 in “Advanced options”, it was installed normally. 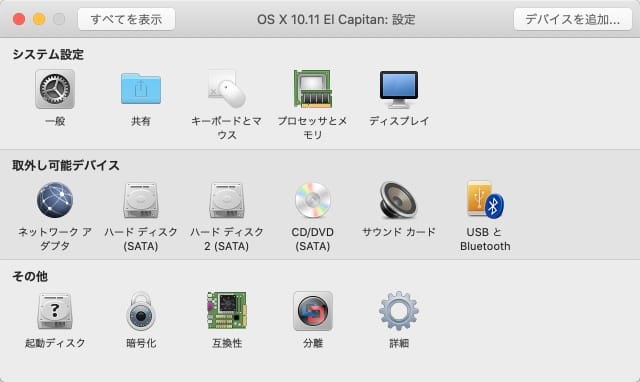 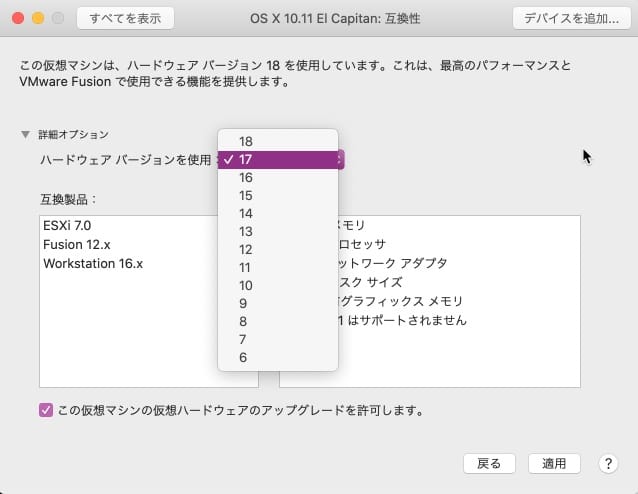 On Windows, neither VMware nor VirtualBox can install macOS by default.

However, VMware can be installed without difficulty by installing an application called “unlocker” introduced in the following GitHub page.

On the other hand, I couldn’t find an easy solution with VirtualBox.

By the way, if you search the net, you will find a solution for VirtualBox, but I think that it is difficult to deal with it unless you are an advanced user because the information is old and the work is complicated.

So it’s safe to use VMware on Windows.

It may seem a bit tricky, but for VMware for Mac and VMware for Windows, I’ll show you how to use the compatibility of virtual machine files.

As many of you may already know, I would like to create a 10.11 El Capitan virtual machine on a Mac in advance and load it on VMware for Windows.

The caveat is that virtual machines must be in a “shut down” state rather than a “resume (suspend)” or they may fail.

To copy the virtual machine file, use an external HDD / USB memory in “exFAT format” that can be read and written via LAN or both Windows / Mac.

The procedure is briefly introduced below.

However, the created ISO files can also be used on Windows.

Please see the following article for instruction on how to get each version of the OS installer.

Mac standard “TextEdit” is fine, but here we recommend the free app “CotEditor” available from the App Store.

The reason for the recommendation is that you can create a script file that can be executed from the terminal as it is by setting “Grant execution right” when saving the file as shown in the screen below. 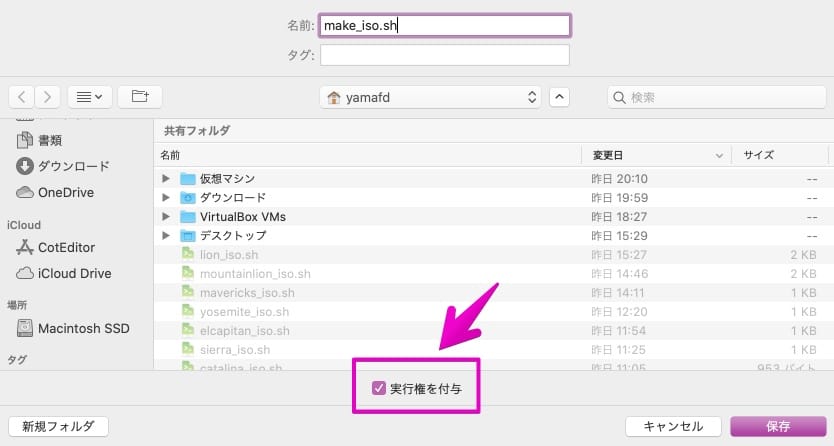 Even if you do not use “CotEditor”, you can grant the execution right by specifying “chmod +x script file name” from the command line of “Terminal”.

This is the end of the explanation of “Shell script creation”.
Continue to “Run Shell Script (Create ISO File)”.

This is the end of the explanation of “Run Shell Script (Create ISO File)”.

Links to get virtual environment software

Download VMware Fusion | VMware
Fusion 13 Player and Fusion 13 Pro are the best way to run Windows, Linux and more on the latest Mac...

This page shows how to check the compatible models of “macOS 10.15 Catalina” released in October 2019 by various methods such as model number.

I will show you how to use the app "Mist" that allows you to download the macOS installer with a single button. It is recommended because it can be fully automated not only for downloading but also for creating ISO files.

How to get the macOS (OS X) installer

I have summarized how to obtain the installer for each version of macOS (OS X) so far. OS X 10.7 Lion and later can still be downloaded / purchased from Apple today (January 2020). Also, after getting the installer, I think that you often create a USB memory for installation, but the procedure is explained in the following separate article.

What does “Big Sur” in macOS Big Sur mean?

I will explain the meaning of "Big Sur" in macOS 11 Big Sur. Simply put, it's called "Big Sur," a famous place in California, USA. Then, I will also introduce what kind of place it is.

This page shows how to check the compatible models of “macOS 10.14 Mojave” released in September 2018 by various methods such as "Model".

Introducing how to check the compatible models of "macOS 11 Big Sur" released in November 2020 by various methods such as model number and appearance. Except for MacBook Pro, you can make a judgment only by appearance without checking the model.

A list of compatible macOS (OS X) versions is posted for each Mac model. The OS cannot be installed or booted for the unsupported version.

I will show you how to create a USB flash memory for installation for all versions of macOS (OS X) after 10.7 Lion. Here, I will explain in detail the procedure using the "Terminal" of the standard Mac application using illustrations.
Use tag and smart folder functions with “Apple Notes” on Mac
Symptom-specific solutions when screenshots are not available on Mac