I replaced the HDD of my MacBook (13-inch, Late 2009), so I will explain the procedure at that time in detail with photos.

In these models, the CPU is Core 2 Duo and the power is insufficient, but the memory can be expanded to 8GB or more and it can be used up to macOS 10.13 High Sierra, so it can be used normally if it is not heavy processing.

Also, the design is pop and HDD / SSD replacement is relatively easy, so if you have a model that you are not using, why not try modifying it as a second machine?

This is a list of Mac models that can replace HDD / SSD by the method explained on this page.

What they have in common in appearance is the body of white polycarbonate (reinforced plastic).

When the main body is turned over, the entire back surface becomes a single plate.

Regarding how to check the model (model), if you have OS X 10.7 Lion or later, you can display it from “About this Mac” in the Apple menu.

The following is the confirmation method for OS X 10.12 Sierra, but the procedure differs slightly depending on the OS version.

▶ Select “About This Mac” from the Apple menu 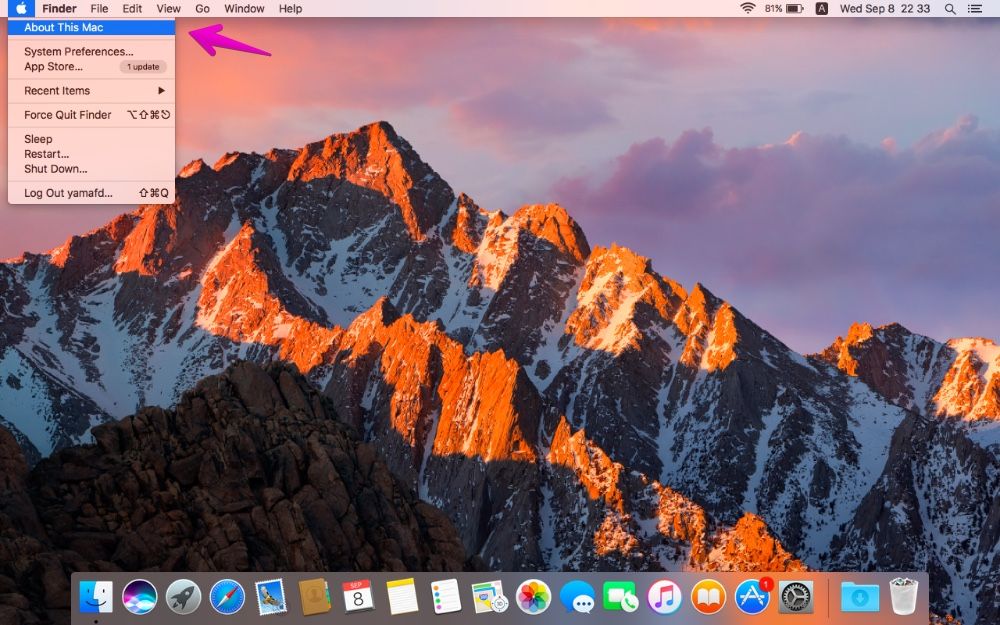 ▶ Mac model is displayed in the arrow part of the figure. 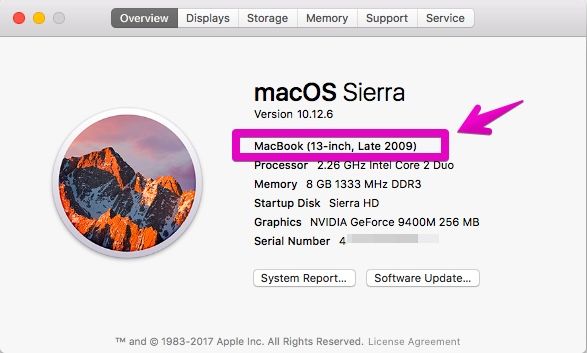 As another confirmation method, the MacBook body is turned over and the serial number is written on the front side, so you can search for the model on the following site based on it. 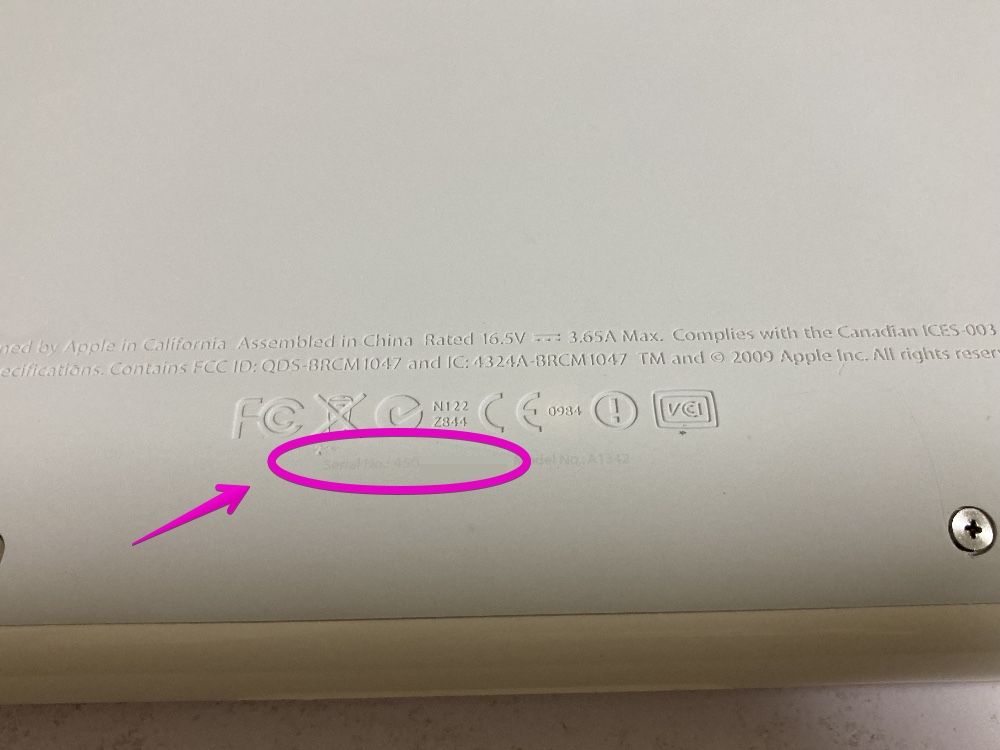 The size of a Phillips screwdriver is “PH00”, but it seems that the size may not fit depending on the screwdriver, so if possible, prepare multiple sizes of 2 to 3 types or more.

The T6 Torx screwdriver is a special screwdriver with a star-shaped tip, which probably few people have.

The maximum capacity is up to 1TB for SSD (some 2~4TB is very expensive), and up to 2TB for HDD, each of which can be selected from multiple options.

▶ Unplug the power cable from your MacBook, turn it over, and remove the eight PH00-sized Phillips screws circled in the figure. 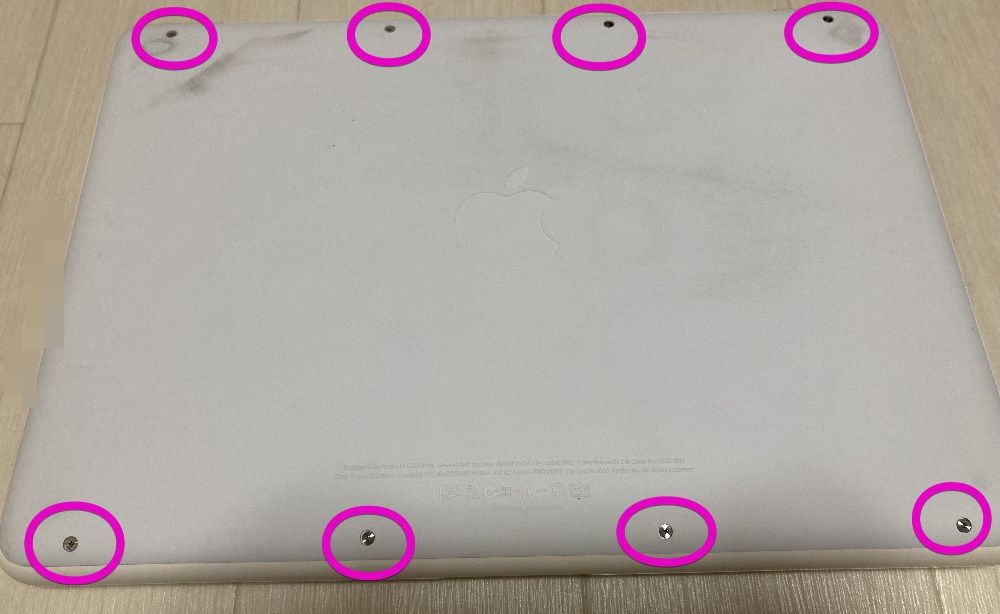 ▶ After removing the screws, slowly remove the bottom case.

The trick to remove it is to carefully insert your finger into the gap between the bottom case and the main body. 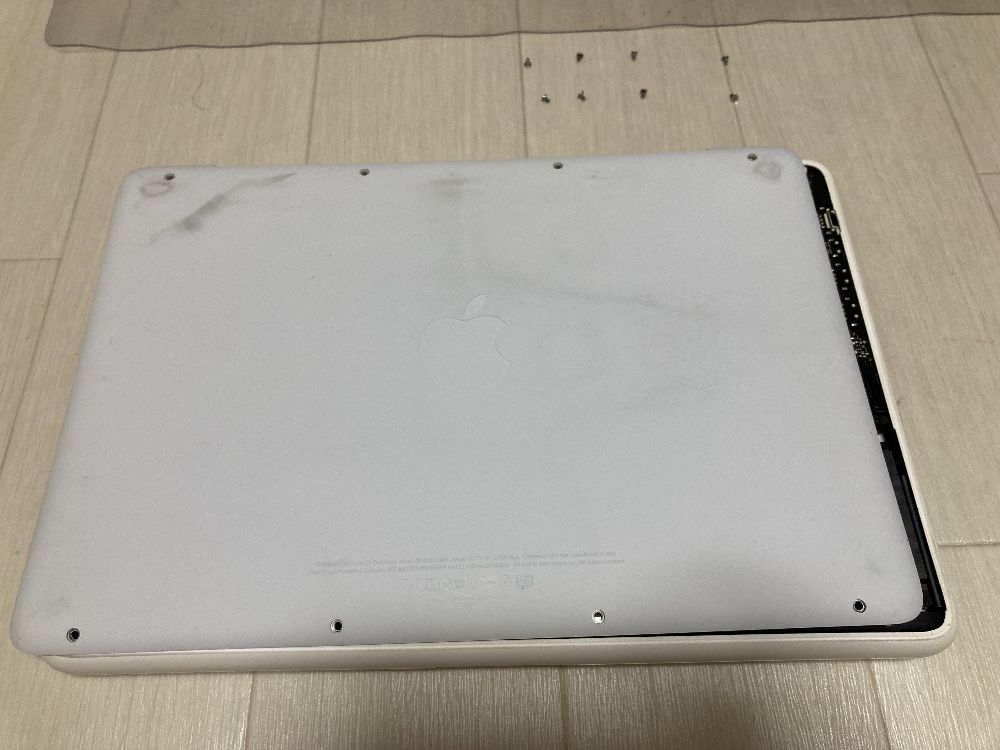 ▶ When the bottom case comes off, remove the two PH00 size Phillips screws indicated by the arrows in the figure. 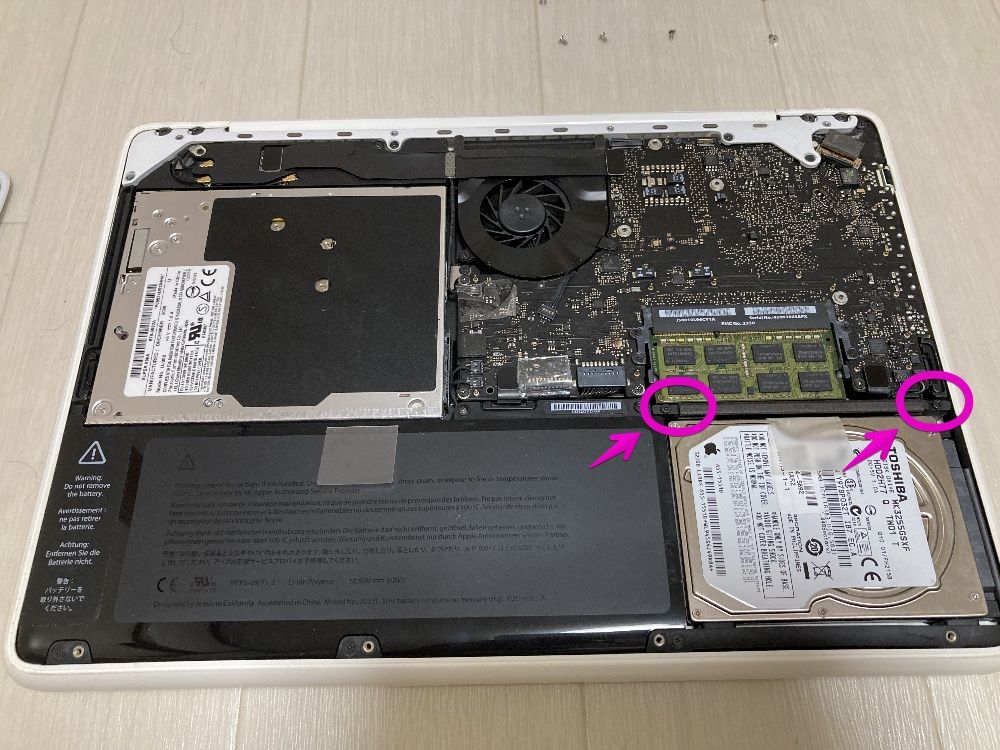 ▶ Once you’ve removed the screws, carefully remove them along with the plastic parts that hold the HDD in place so you don’t roll them onto the board inside your Mac. 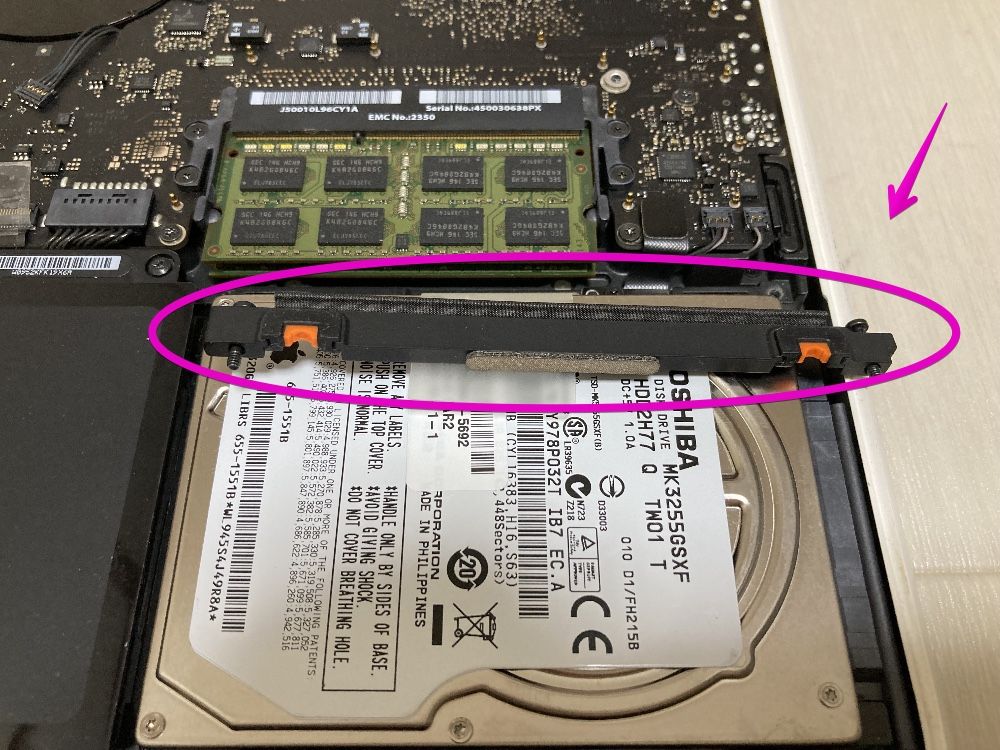 ▶ As shown in the figure, while removing the HDD from the Mac body, remove the connector part indicated by the arrow. 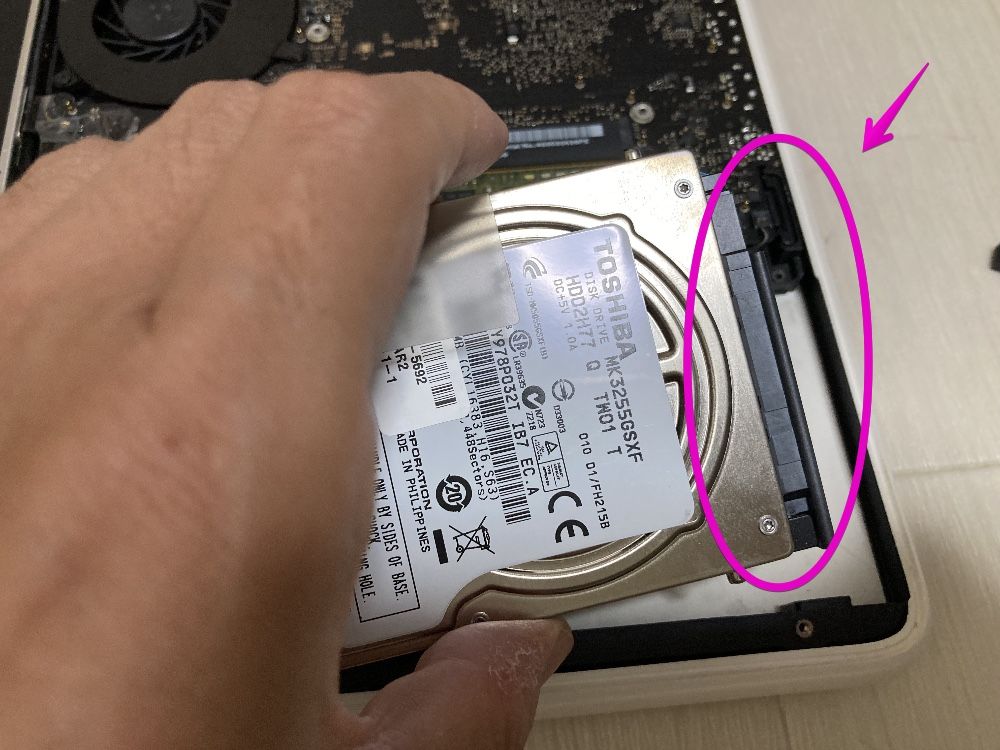 ▶ After removing the HDD, remove a total of four T6 Torx screws on both sides of the HDD with a Torx screwdriver. 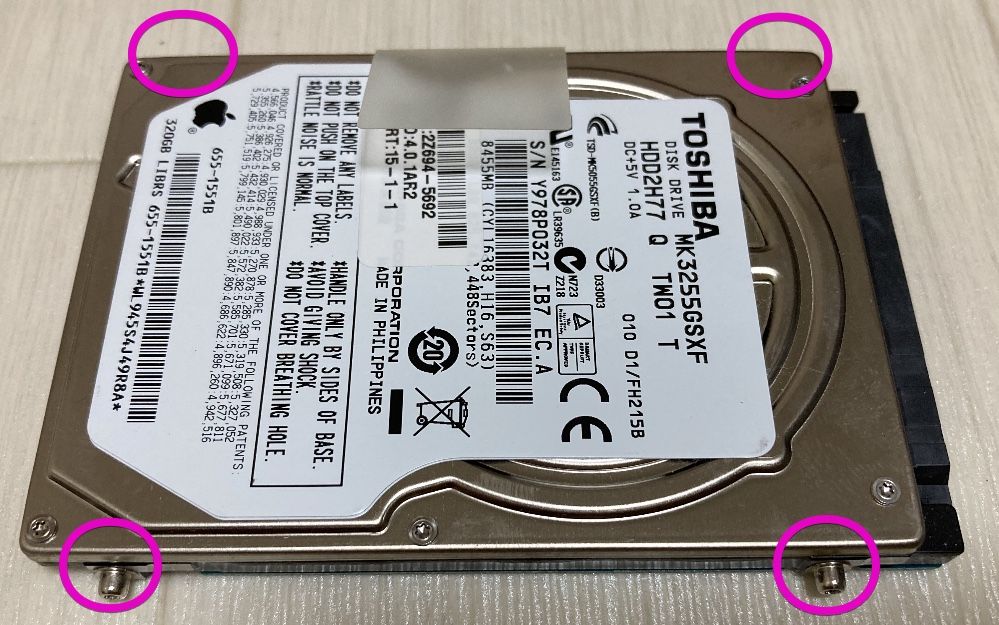 ▶ After removing the screws, replace them with a replacement HDD / SSD and assemble in the reverse order up to this point. 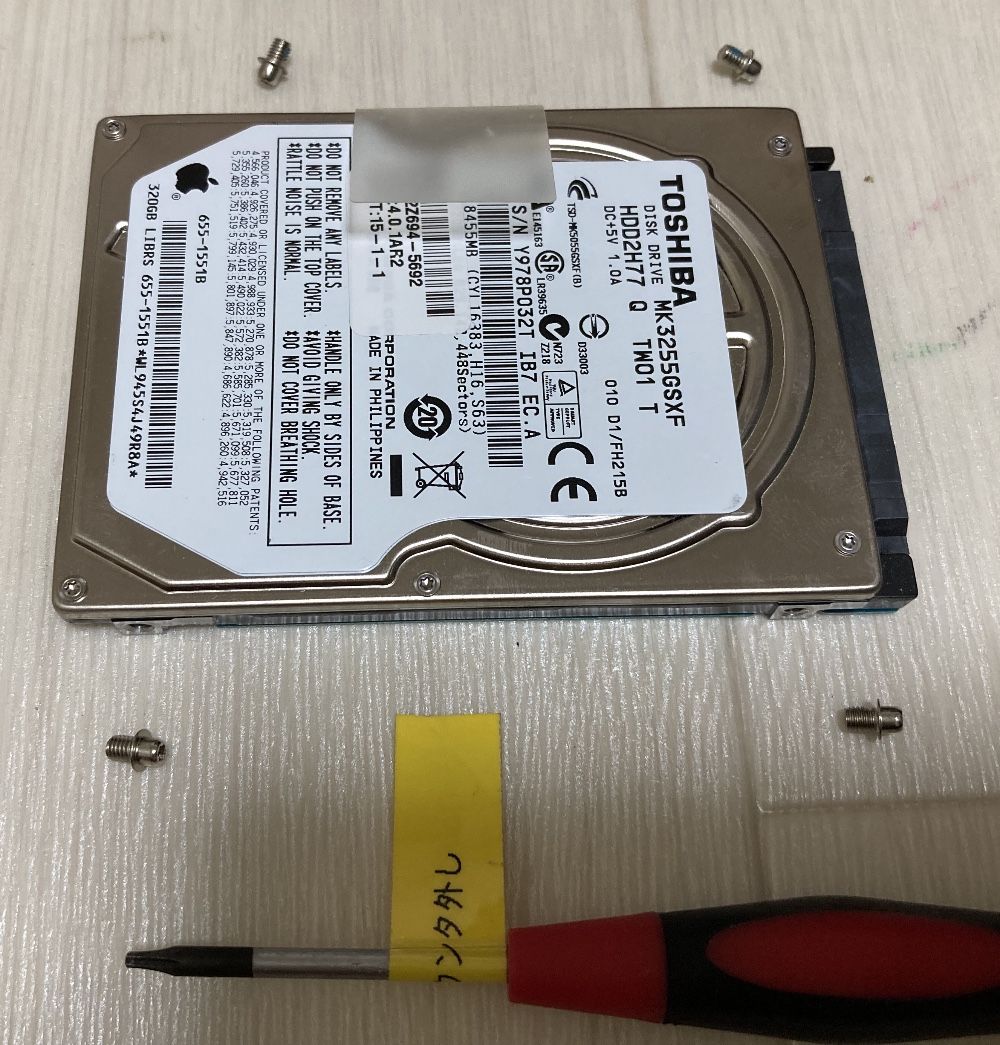 The MacBook introduced here is old from 2009 to 2010, but it can be used more quickly than Chromebooks and Windows with low specifications of around $ 200 to $ 300.

So it’s a good idea for someone who already has another Mac to buy a second hand for internet search or light work.

MacBook Unibody Model A1342 Hard Drive Cable Replacement
This guide will show you how to replace the...

www.ifixit.com
This is the end of the article on this page.

You joined AppleCare+ when you bought your Mac, but later sold or transferred your Mac. If so, can AppleCare+ be renamed? This section explains.

How to replace HDD/SSD in MacBook Late 2008 Aluminum

I replaced the HDD of the MacBook (13-inch, Late 2008) aluminum body, so I will explain the procedure at that time in detail with photos. This model is the only aluminum unibody MacBook. Also, since it is an old Mac, the performance is too low to use in the main, but it supports up to macOS 10.11 El Capitan, SSD can be easily replaced, and although it is unofficial, the memory can be expanded up to 8 GB, so you can browse the net and create documents etc. It is active enough for the purpose of.

Since I replaced the HDD of iMac (21.5-inch, Late 2009), I will explain the procedure at that time in detail with photos. Models around this time are easy to disassemble, support OS up to 10.13 High Sierra, and hardware performance is not bad, so I recommend them.
How to replace HDD/SSD in MacBook Mid 2006~Mid 2009
How to print “Notes” app on Mac